Online retail, like any market, is dominated by its well-known giants like Amazon,  Zalando, Zara and so on. But there are thousands of small and medium sized shops that are being quite successful online shops with growing traffic and revenue, sometimes to heights that not even they themselves dared to forecast.

There are an estimated 100,000 online shops operating in Spain, the 4th biggest online retail market in Europe surpassed only by UK, Germany and France. The total revenue in 2016 for this sector in Spain was around 28 billion euros, which is quite a bit lower than the UK (197 billion), Germany (86 billion) or France (82 billion) according to the statistics published by the Ecommerce Foundation. However, only 54% of Spaniards purchased goods online last year (vs. 75% in France, 82% in Germany and 87% in UK) and only 11% of the companies here are selling online. This means that the number of successful online shops is only going to grow in the Spanish market. And while the average growth in online retail in Europe is projected to be around 16%, for Spain this is up to twice as much. The Spanish consumers are expected to start catching up with their counterparts across the border soon and truly embrace the online shopping experience once and for all. 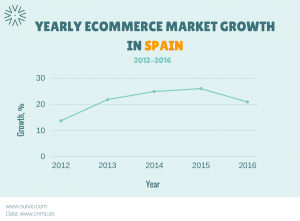 The global consensus seems to be that no matter what your niche, successful online shops sell online. And Spain is definitely one of the places to do it. You can check out our article on how to launch an online shop and how to grow and online shop to start selling now.

There is a huge number of successful online shops to be found on the Spanish market. Below are just 5 of them. These successful online shops have ridden the tidal wave of internet retail with great skill and are at the moment welcoming over a million visits to their sites each month. They are shipping over 30,000 packages a quarter and they have all achieved this within the short timeframe of 6-7 years.

Mr Wonderful is a really wonderful example of the successful online shops found in Spain. Being quite new in Spain myself, I did not know the story behind this brand before I started writing this article. But I was pleasantly surprised to learn about their remarkable path to success.

I first saw Mr. Wonderful products around when doing my daily shopping in El Corte Ingles.I fell in love at first sight! But it has been kind of a long-distance crush since I have never actually purchased any of their items. Although the selection is wide, all the way from chocolate bars to umbrellas, so I am sure I will be able to fix that shortcoming in the near feature and brighten up my day with their mellow insights to life.

Mr. Wonderful was founded in 2011 by a couple, Javi and Angi, by somewhat of a coincidence when they were casually sitting on their couch at home one evening, planning their wedding.

What a perfect beginning for a start-up!

After designing their own wedding invitations, which were a great hit with their friends and family, they started posting images with positive and inspirational slogans on social media in the same light and humorous style. From there they were basically forced into business by the viral attention they got – first by their followers and later by the prestigious brick and mortar retailers – El Corte Ingles and the likes. 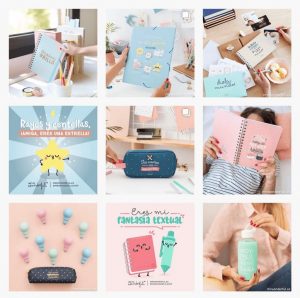 Barely 6 years later they are employing over 150 people, selling in over 26 countries, plus online. They are welcoming over 1.6 million visits to their web shop monthly and in 2016 reached over 30 million euros in revenue.

The story of Mr. Wonderful is truly a story of the power of social media and Facebook and a text book example of viral marketing gone right.

What to learn from Mr. Wonderful:

The story behind Bebitus is quite the opposite to Mr. Wonderful. It also begins in 2011, which seems to have been quite a year for launching online shops.

However, when Mr. Wonderful was born almost by accident, just by stumbling over a niche the public was eager to welcome, Bebitus, on the other hand, was a strategy finely envisioned. Executed meticulously from day zero by its founder Guillermo Sanz.

Before building Bebitus, Guillermo Sanz used to run the logistics for Privalia and Caprabo and he definitely knew what he was getting into. And he fulfilled ambitious plans with enviable precision.

Sanz had heard of an online shop called Diapers.com in the US, which was offering a wide range of baby goods and was doing quite well. In fact, so well, that in 2010 its parent company had been acquired by Amazon for 545 million dollars.

With some market research, he found that a German company had copied the Diapers.com concept and was doing extremely well in its home market. He decided to do the same for Spain.

With his savings and some credit, he invested in the website and bought 70,000 euros worth of stock and started selling. When the orders started coming in, he handled them in person. All three of them per day.

But this tranquil setup did not last long. Using viral campaigns, discount coupons, and free transport with a threshold, Bebitus quickly grew to rule the baby products market in Spain within the year. They secured first round of financing in 2013 – 1 million euros for 14% of the company. By 2015 it had expanded to France and Portugal.

In October 2015 Bebitus was acquired by the German online baby goods start-up Windeln.de. Windeln.de had secured 45 million euros worth of funding the previous year and was looking to quickly grow its presence in Europe. Bebitus was a logical choice. With it, Windeln.de now had presence in 10 different countries in Europe, making it the market leader in the baby goods sector. Interestingly, Windeln.de is also one of a few European shops doing great on the Chinese market.

The deal for Bebitus was closed at 5 million euros in cash and a supplement of up to 40 million euros, dependent on its revenue by the end of 2017. Guillermo Sanz is still running the company to this day.

Remarkably, the mysterious German online shop that inspired the establishment of Bebitus in the first place, was quite likely Windeln.de itself.

What to learn from Bebitus:

LaTostadora is a bit older venture than the previous two. It was launched officially by two university friends in 2007 as a successor of an online on-demand T-shirt shop called SetaLoca.com, which had already been operating since 2005.

Although SetaLoca had not done bad, it was not fulfilling the ambitions of the founders. Its fans were the ones who were responsible for the inception of the idea behind LaTostadora. 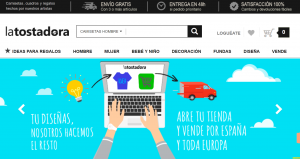 All its affiliates had to do was to upload the designs and set their margins. Once someone bought an item with their design, the affiliate would collect its share and LaTostadora guys would do the rest from printing to packaging and shipping.

It does not seem like such a long time ago, but 2005 was a completely different world. Facebook was not even open for public profiles; Amazon’s revenue was below a “miserable” 9 billion; and YouTube was operating above a pizza place in San Mateo, California. It seems insane how much things have changed, but it appears 10 years in the internet age is more or less equivalent to 70 pre-internet ones. Works the same way as dog years I guess.

So Ivan, Albert and Daniel, the guys behind LaTostadora, did something quite remarkable. They were pioneering the online market and not by just making an online shop, but by creating a freelancer’s market at the same time.

What to learn from LaTostadora:

While all the previously mentioned shops have been born online, there is another category of online shop that is finally coming to its own. These are shops of long established brands and brick and mortar stores that have succumbed to the rise of eCommerce and rightly made their move to the market.

Mayoral is a brand with 76 years of history. It was first founded in 1941 as a socks and stockings label called Domínguez Toledo and by the end of the 70s it had grown into a full-fledged privately-owned children’s fashion brand Mayoral. 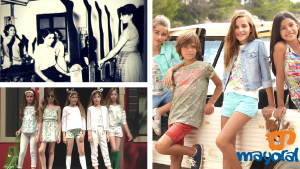 Mayoral is a well-known classic in Spanish fashion that has representation in over 75 countries, around 190 own locales and more than 10,000 points of sales in the world.  And even though their company website was first registered already in 1998, it was not until 2014 that Mayoral took the leap and finally opened the doors of its online shop.

75% of Mayoral’s over 350 million euro revenue comes from abroad, which is why it was one of the winners on the market while the majority in Spain was hit by the crisis a few years back. It has been moving up and to the right with unwavering determination. What is most remarkable, is that it has also increased its domestic sales around 10% per year for the last 3 years consecutively. Something quite likely to do with the 1,000,000 visitors to its online shop every month and strong presence on Facebook, Instagram and Pinterest.

What to learn from Mayoral:

Now to be fair, by our estimates Ulabox still is not delivering quite 10,000 orders a month yet, but it is almost there. The reason Ulabox is on this list is because it is a great example of how a start-up can come into a very competitive market, where giants have been dominating for decades, and show how it really should be done.

The founders Jaume, Sergi and David will be the first ones to tell you that there were plenty of people advising them to quit this crazy idea. 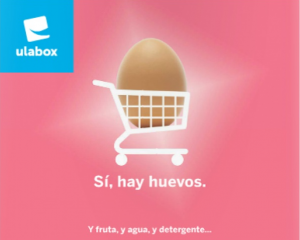 Ulabox is positioning itself as the Anti-Supermarket that does things differently from the traditional physical supermarkets. Which is great. But what is even better, is that it is also an Anti-Online-Supermarket as well.

If like me you have ever been shopping in any of the online outlets of the likes of Hipercor, Mercadona, Caprabo or Carrefour, then you know that the experience can be as frustrating as the real thing.

Outdated and unfriendly user interfaces, unintuitive processes, carts with a life of their own that empty themselves at will, non-responsive designs – these are just a few of the “pleasures” of shopping in an online outlet of the traditional supermarket. Not to mention that later on, the order fulfilment process and delivery are played out like a very bad comedy – 99% of the time you don’t receive everything you ordered and 5 items somehow manage to arrive packaged in 8 separate plastic bags.

It is inspiring to see someone having the guts to take on the giants. And to do it well.

Ulabox was founded in 2010 and has had a few rounds of financing over the years in the total amount of ca. 8.5 million euros and is estimated to have sold around 12 million euros worth of goods in 2016.

The story of Ulabox has not been the typical skyrocket narrative of a fast growing start-up, but it has definitely been one of perseverance, vision and, hopefully, continued sustainability. We at least wish them the best of luck in their endeavour.

What to learn from Ulabox:

As expected, there is no single formula for successful online shops. And this is great news! There are opportunities everywhere and 90% of starting something amazing is just keeping your eyes open and being ready to take action! The rest will follow. Outvio is chosen by some of the most successful online shops. We can help you with starting your own little revolution, just join Outvio!